Try as I might, I cannot get making anything which is frustrating me.

However, I’m not doing nothing.

I have decided that I want to work on an exhibition around ideas that have been been floating around my head for some time. They keep changing, as these things do, but the core has remained an area of interest for a few years now and it’s time it came out – one way or another.I have felt delighted at the reaction the last post received, but frustrated that I couldn’t progress it into my textile and mixed media world. Keeping a blog brings many emotions and I have had to fight the self-imposed pressure I felt to carry on with something similar. It’s just not happening. Doesn’t mean it never will but it’s not right for now. I have played around with the concept some more, and sampled some circular text but it’s going in the ‘waiting room’ for now.

This says ‘I’m right’ in the lighter inside colours and ‘you’re wrong’ in the darker text pointing out. I was needing to justify myself over something! It was quite cathartic, but it faces you with issues about being kind and forgiving…I was going to try one where it said ‘I’m wrong and you’re right’ to see how differently it felt and looked.

These are bits of leftover stuff, they remind me of Carolyn Genders’ ceramics but they won’t be happening either, because making something like this isn’t enough without passion. I have to be absolutely invested in something to persevere and a body of work will take that.

So… I have enrolled in a higher level course to help me develop ‘me’. The course is a delight as it allows the participant to follow personal themes and preferences without being too prescriptive. Whilst not making for a while has been an interesting frustration, I have been thinking deeply. I do like a bit of thinking as you will know, but it’s hard work. Trusting the open but directed steps of the course is provoking and pushing me which is just what I need. I know that I’m not making because I need to do this preliminary work to enrich what will eventually be. Studying artists from other disciplines is enlightening, writing about what they do, how they work and what I like about them is highlighting what I like to do, and what I like. I never studied art formally at school so it’s all new. The connections made between them and my thoughts somehow sets something in place at a deeper level.

I have a giant mind-map on the table to capture the ideas tumbling around. They are sometimes fleeting so it’s important. Him Indoors says it looks like a neurone which is fine, it being my mind on a page. I’m just surprised that he didn’t choose a less attractive metaphor.

I’m interested in containment and in particular, how our self is contained by physical and psychological walls. In a while, I will have started sketching and exploring possibilities arising from a poem. Researching around the theme of walls and stone walls in particular has been a delight. I feel contained by the stone around me at home in Yorkshire, it gives me a deep peace, so I have started here and will post some work around this next time. 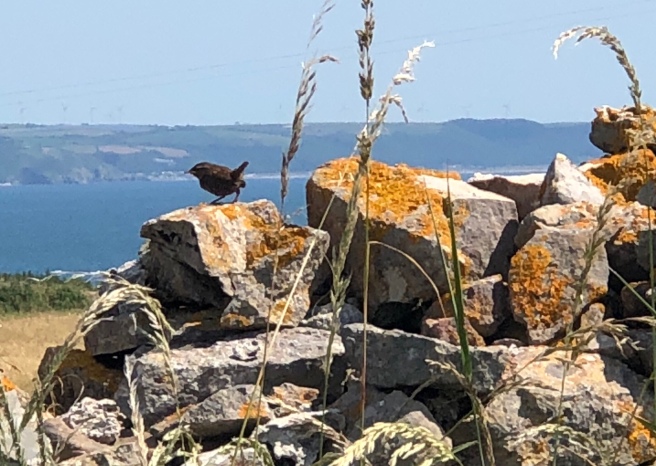 I’m on holiday, so these are some Welsh walls. Walls have quite different characters.

I felt the need to say ‘I’m still here and check in as I will be having some enforced rest over the summer following an operation. I will be back blogging as soon as I can.