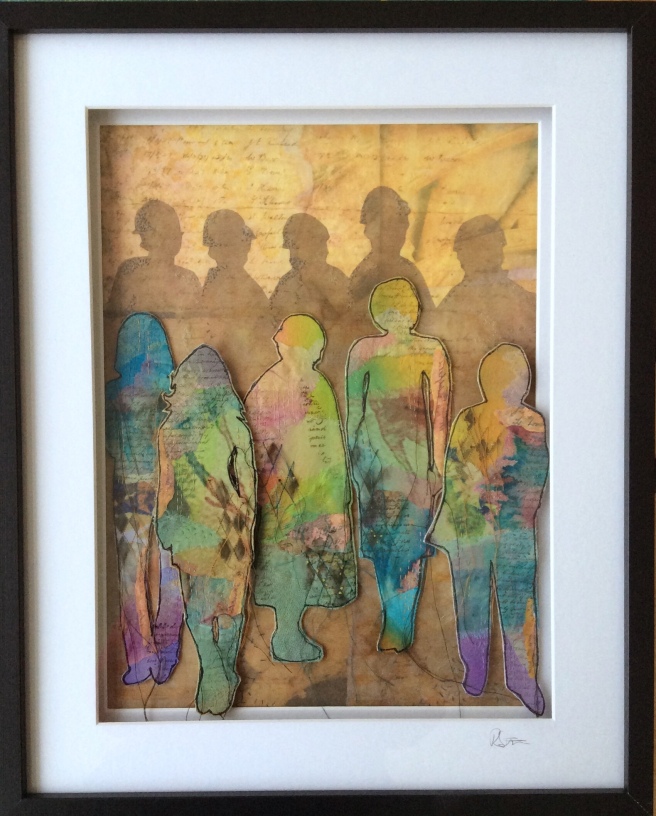 I thought I’d tell the story behind a piece of work which is shortly going to the National Mining Museum. In preparation for the exhibition, several of us went to visit to walk around the buildings and read the information permanently on show. However, I had done a bit of digging beforehand (pardon the pun) using the internet and something about the way couples and families grew apart during the strikes stayed with me. I don’t usually represent people in my own work but on this occasion it was what most interested me. I think maybe I recognised something of myself in the women I am about to describe.

In the 80s, mining communities were consumed by the effects of the strikes. The women rose up through the protests and whilst the strikes were times of immense hardship, they instigated change which could not have been predicted. The women found new strength and direction in their lives. It was not easy: relationships were torn apart as courage, education and new choices created different people. Many of them (and the men) went on to undertake education and subsequently jobs which they never would have imagined. I have felt changed by education, personal development, choices and age and through it all I recognise a stronger voice. However, it has not been at the personal cost that it was for many of them during this intense period. The power and resilience the women discovered led to greater expectations about life opportunities – being a miner’s wife was very hard and despite taking pride in the role, it was a life of domesticity and toil. Finding their voice led to greater expectations for their lives but they were not always able to share these with the menfolk. And they ‘just became different people’ to quote one woman.

The piece shows the men in silhouette, shadows of coal dust made by tiny seed stitching, and the background made with digitally altered photos from my visit. The writing is taken from a log book at the museum, recording mining accidents and deaths. These were gel transferred. I used a piece of bonded silk organza which was coloured by rust and tea and echoed the metal of the machinery. I wanted them to be there in the background – to be both present and past for the women in the foreground.

The women were made vibrant in comparison – representing their strong voice and characters. I pinned colourful fabrics, sheers and teabag paper on top of a background of dyed cotton.

Outlines were machined which held the pieces roughly in place so that I could stitch more detail. 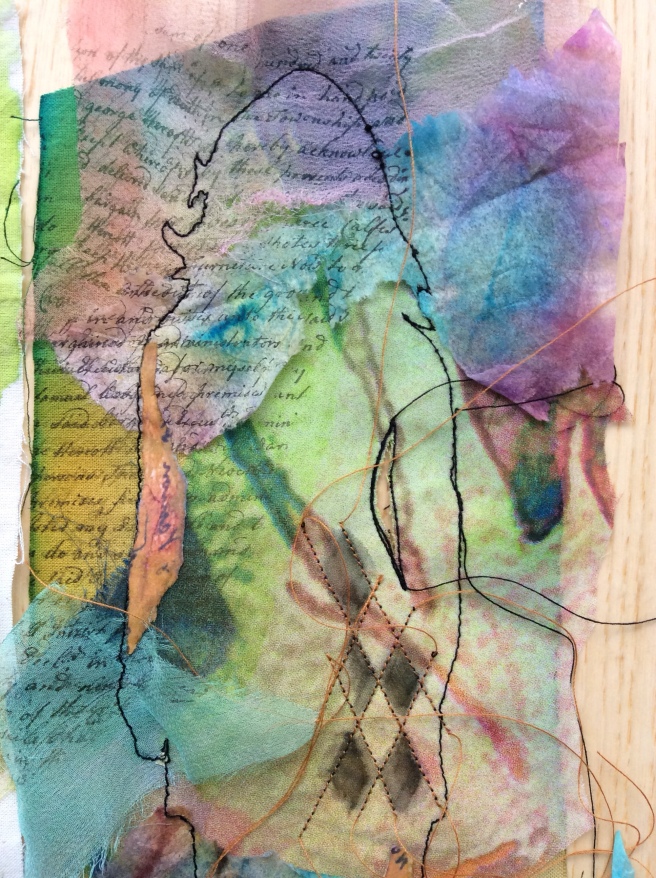 The fabric contains script which is actually part of a will. This felt a poignant inclusion which remembered the almost daily loss of lives through the mining industry.

The threads are left loose to show how ties to home life and relationships were cut but conversely small pieces of imagery remain on their appearance linking them to their past. Each woman has a few black diamonds on her clothing. ‘Black Diamonds’ was a colloquial term for coal and aptly described its worth to industry and weekly pay cheques. Despite becoming different people in the end, I wanted them to have something of their former lives as this was their beginning and memory is always part of us through all our changings.

I tested some stencils with Kohinoor and Inktense to see how best to make marks which didn’t bleed too much. In the end, I actually ended up using black acrylic for the diamonds which were emphasised with machined lines.

The women were backed onto Decovil and trimmed. They stand proud of the background, being attached by several sticky foam dots arranged in small stacks.

Like many, we are preparing for Christmas, in our house Him Indoors is much more diligent with domestic chores than I am. I can’t imagine having to scrub his back in a tin bath filled with water I had to boil on the hearth, or washing his coal-stained clothes every single day. I don’t know how those women and men did what they did. We are very fortunate. Anyway, he’s about to come at me with a floor mop so I shall have to slink off as a mopped floor is a sacred space and I shall not be allowed passage even in my slippers. Happy Christmas, see you next year! x

8 thoughts on “We Are Different People Now”