I have been enjoying several articles and videos that people have shared via social media. It’s a real window to so much that would have taken years to discover in the past. I have been collecting some thoughts about volume. Let’s start with volume of work. I’ve been saying to friends that I’m often disappointed that what’s in my head doesn’t come out well in reality and Ira Glass has something to say about this :

‘All of us who do creative work, we get into it because we have good taste. But it’s like there is this gap. For the first couple years that you’re making stuff, what you’re making isn’t so good. It’s not that great. It’s trying to be good, it has ambition to be good, but it’s not that good. But your taste, the thing that got you into the game, is still killer. And your taste is good enough that you can tell that what you’re making is kind of a disappointment to you. A lot of people never get past that phase. They quit. Everybody I know who does interesting, creative work they went through years where they had really good taste and they could tell that what they were making wasn’t as good as they wanted it to be. They knew it fell short. Everybody goes through that. And if you are just starting out or if you are still in this phase, you gotta know its normal and the most important thing you can do is do a lot of work. Do a huge volume of work… It is only by going through a volume of work that you’re going to catch up and close that gap. And the work you’re making will be as good as your ambitions.’

I was rather taken aback that this man knew what it was like living inside my heed. Spooky! I’m an optimist though and sometimes a thing is created that’s instantly pleasing – I am open to surprises and serendipity. It’s not all hard work.

Another good article is this one:

Next, volume of ideas. At work, I’m always talking out loud about what could work, how we could try this, or plan that, and I know some of what comes out of my mouth is rubbish. It’s a risk, but occasionally something actually works having put myself ‘out there’. I don’t have trouble with volume of ideas, I have trouble sticking to any. So look, someone else who understands…

‘To be creative, what we are looking for is not one idea but dozens of ideas – some good, some average and some rubbish. We need to go through the wrong stuff to get to the right stuff.’

‘Creativity is just connecting things. When you ask creative people how they did something, they feel a little guilty because they didn’t really do it, they just saw something. It seemed obvious to them after a while. That’s because they were able to connect experiences they’ve had and synthesise new things. And the reason they were able to do that was that they’ve had more experiences or they have thought more about their experiences than other people. Unfortunately, that’s too rare a commodity. A lot of people in our industry haven’t had very diverse experiences. So they don’t have enough dots to connect.’

Well we’ve just had our penultimate weekend together in Redditch, and produced a rather surprising volume of work. We had thousands of dots to connect this weekend in the form of little wax pellets to play with (did you like that seamless segue?). None of us had used wax before but we all enjoyed experimenting with paper and fabric in abundance.

I had taken down some work where I had cut out the lines from my pebble blocks using a strip of Decovil and bonded silk chiffon painted with acrylic.  Something a friend had mentioned about the rhythm of the sea shaping the pebbles had set me off thinking about reflecting a turning movement.

The cut out lines applied onto a thinner strip. 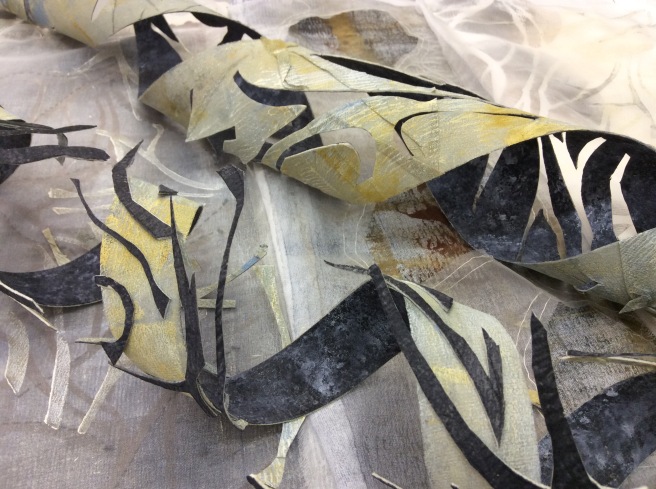 These are the lines from the pebble blocks I used.  They were stamped onto layout paper so I could place them, then transferred with carbon paper. 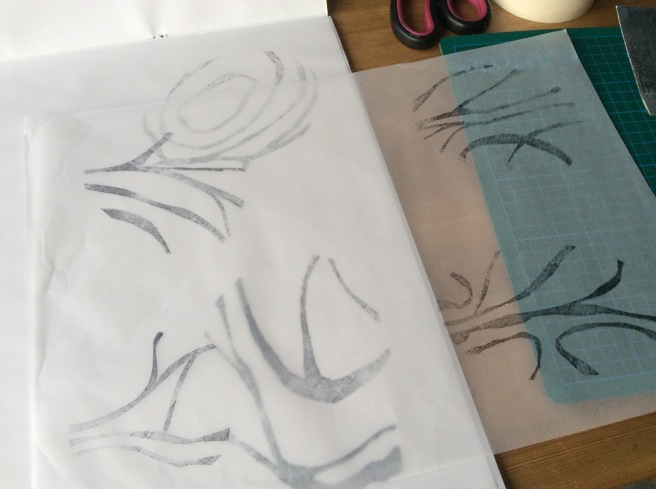 I wanted to see if wax and papers would be good for making these forms so l laminated two pieces of handmade paper with beeswax.  I had taken some blocks with me so these were melted and painted onto the paper.   Once dried, I wrapped them round a tube covered in parchment paper and lightly heated them with a heat gun whist pinned top and bottom.  This formed them nicely. 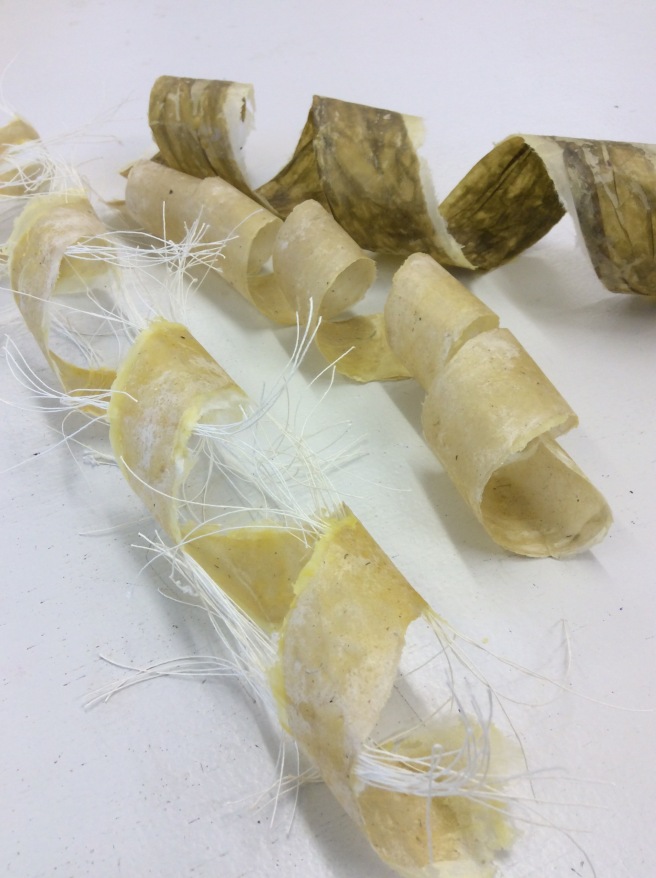 Really liked the hairy one! 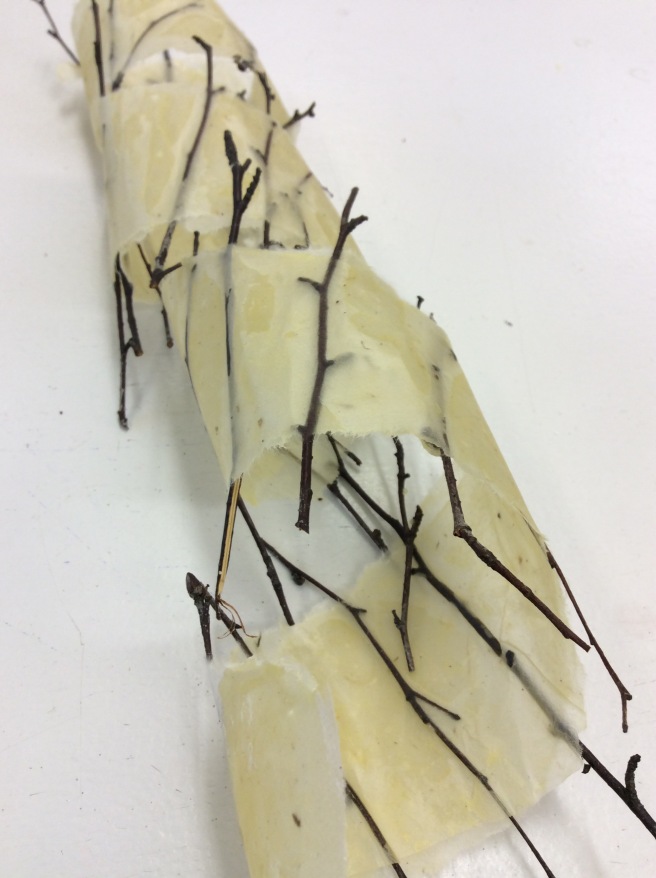 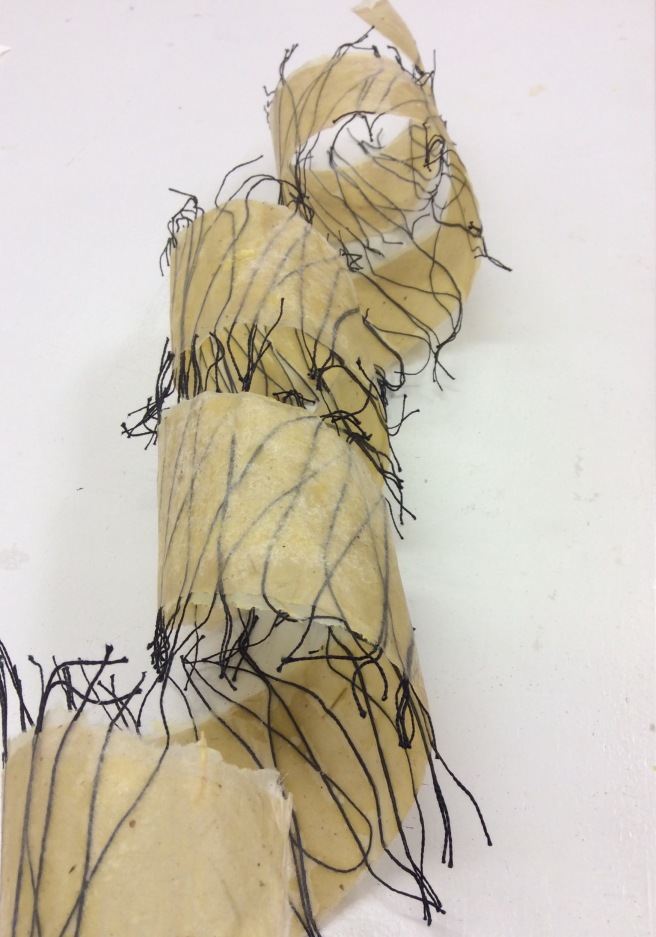 Looking through again.  I found myself interested in photographing these from this angle, and there was a bit of a link to my work at the summer school.

I certainly produced a volume of work, practically waxing everything is sight!  Here are some of the 2d samples, just seeing how it changed materials.  I wish you could feel the bark, it was completely softened and malleable, and one of the best results we all had was with handmade paper.  It cracked deliciously when crumpled up. 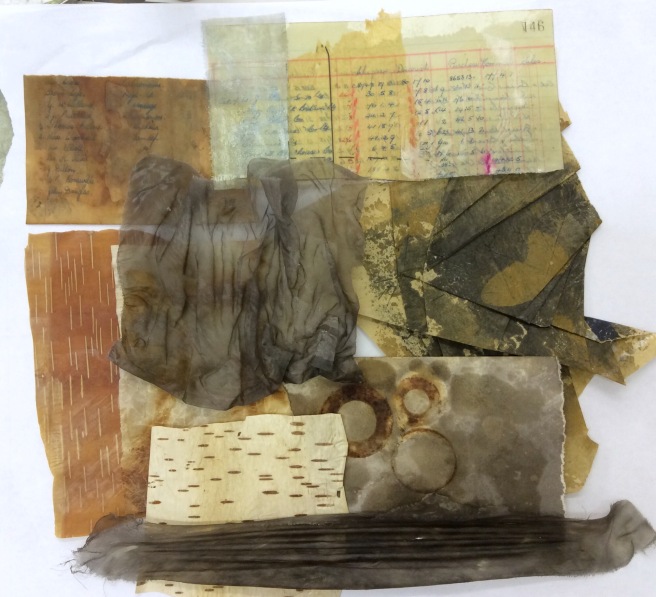 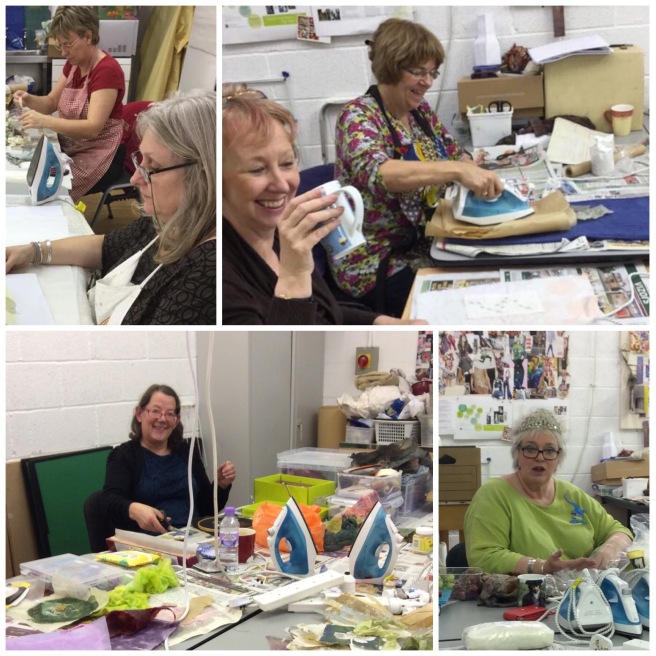 I ended up with a whole studio to play in.  The space is great for working with BIG ideas.

And here are some snippets of work from the group…

Waxed baby wipes were a real revelation.  They will pull on the bias and keep their form, as does silk voil.  Lots of potential there.

‘Fred Flintstone’s Sunday Best’ was also finished.  This was part of my pebbles work. 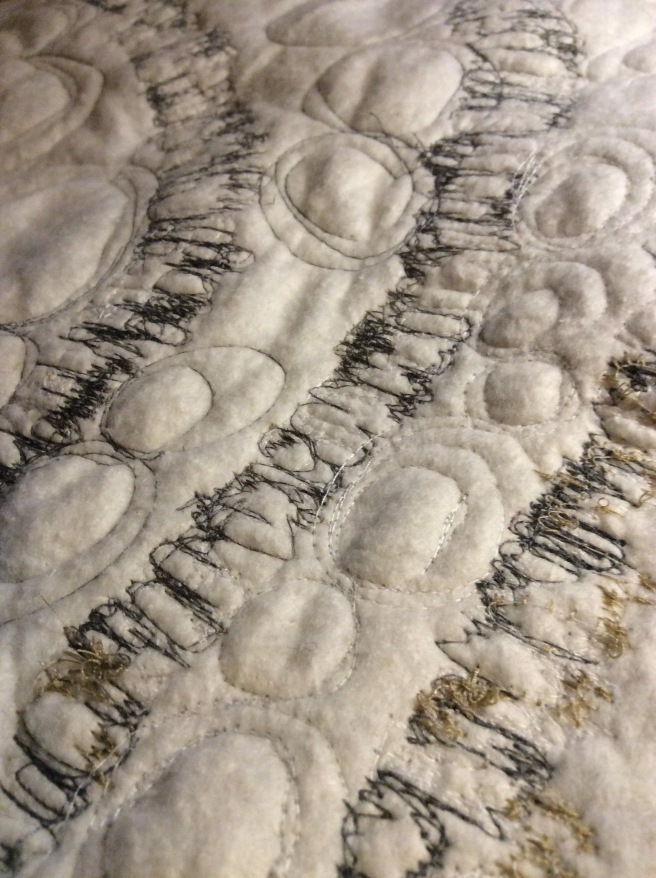 The West Country Quilt show in Bristol was a success. 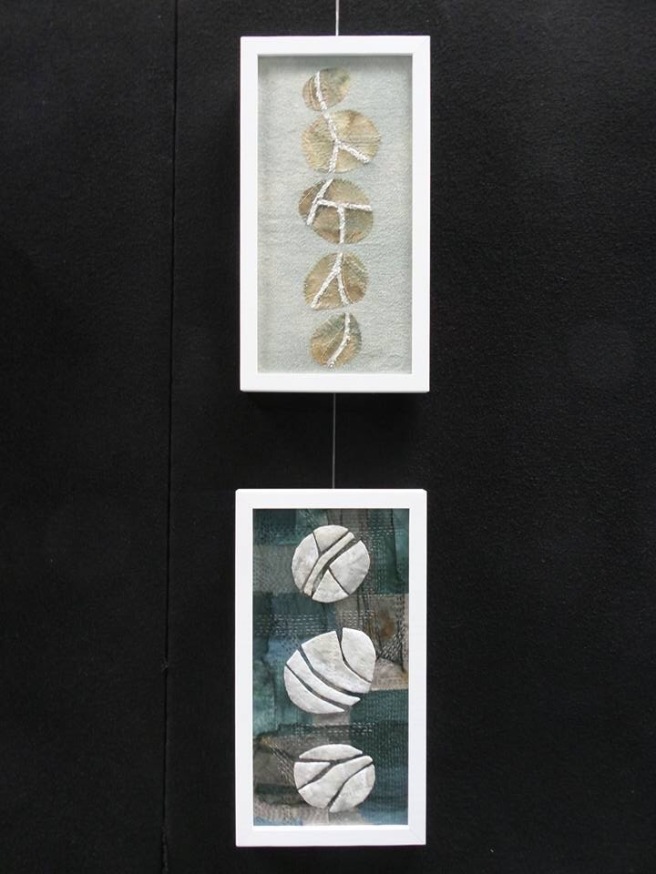 The girls did a fabulous job hanging and stewarding and there was a lot of learning about how to approach exhibiting work etc.  We are going to be able to put a few pieces up at the NEC in March as well. All very exciting!  However, it feels a bit sad because I can’t carry on travelling so far and I think Spring next year will see me leaving Out of Line and hopefully establishing a small group nearer to home.  I’m not thinking too much about it yet because they are such good friends.

Finally, this is the ‘Solace’ project if you haven’t seen it – just might be something nice to start over the holidays or to mark the New Year.

Wishing you all a Happy Christmas and New Year.